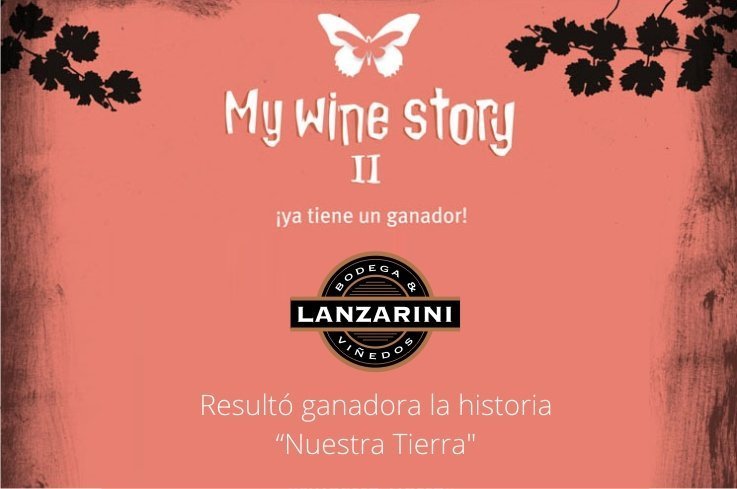 We wanto to thank to everybody that voted for our stories in the contest  "My Wine Story 2". The story "Our Land" was the winer.

For the ones that did not have the chance to read them all, here you will find all the stories together.

Say an old joke: “Peruvians come from the Incas, Mexicans from the Aztecs and Argentineans from the ships”. This is not entirely true, but in my case is so true, Giuseppe ensure, as God exists.

Giuseppe Lanzarini, would be something as the great-grandfather of my grandfather, and from his time to this day my family worked the land and still does it. That is why we belong to this land, our roots are in this country as the vine that we water, as the natives who inhabited it earlier.

This story begins around 1905, on a boat from Italy to Chile, Giuseppe and Emilia with their children looking for the abundance promised in this side of the world.

Giuseppe Lanzarini, gardener of the convent of nuns in Modena, Italy, fair man, catholic to the core, owner of a Roman nose that I carry or a Cesar had. He conquered Emilia, but really should had been more a proposition without kisses or romanticism, just: “let’s get married, girl”. Or maybe, Giuseppe promised America, from Argentina to Canada. Now couples know each other, in a disco, in a bar or even on the Internet, my predecessors met in a convent. And they decided to begin their journey, escaping the starvation that stalked Europe, with a couple of wars about to burst, arrived to Chile carrying his only luggage: the blessing of the nuns. And if he had been told that her grandchildren were going to have its own wines under his name, he would not have believed a  single word.

Giuseppe and Emilia Lanzarini were expecting a prosperous fate, shaped by their own dreams, a future for their children, a blue sky and 120 acres of land to grow grapes. The immigrants got of the ship to face a new reality, to find broken promises, to discover a land not as vast as they had hear of and fell down under a sky that was quite similar, unfortunately, like his distant Modena.

They survived until January, and began the crossing of the Andes Mountains, the mules just carried the children in fruit crates. My great great grandfather, Leonardo didn’t walk or talk, but had a first class seat, with a privileged view to the infinite cliff. On the way, they heard of a General called San Martin who did the same trip to kick out rich Europeans from America, that where now returning owners of extreme poverties, but they did not believed it.

They arrived to Rivadavia, where a compatriot Don Gargantini, stretched out a hand and Giuseppe broke both gardener hands doing hard work, and I almost one hundred years later I write this with my hands, last shoots of those roots. But back to the story, were I don’t play a part, until many vintages later. This good man gave them a house, furniture, food and a brand new idiosyncrasy to the Lanzarini family, which it was payed back with hard work of the recently arrived Giuseppe.  He did not allow his legs to cool down from  his walk through the mountains, and started to work right away.

From that day the dreams began to bloom like the vineyards in the springtime, and the story to grow as the snaking vine branch.

Two of Leonardo’s sons, Alfredo and Jose Lanzarini, chose the same path, one full of crops and wines. Everything was smooth sailing, with the cleverness for business that characterized Uncle Alfredo and the perseverance in work of Jose.

In 1936 Alfredo bought the winery trough a variety of deals and payments like a CEO of any big US company.  In ten years, the winery went from producing 1 million liters of wine to 5 million. Also he acquired a few acres of vineyards and all of this allowed this partnership or “brothership” to prosper.

1945 brought the end of the Second World War in Giuseppe’s old continent.  even though early death would not leave the world. On this side of the Atlantic it rushed  to the end, the life of Jose Lanzarini and,  three years later uncle Alfredo and my great great grandfather Leonardo, by pure sadness. Like that, in a blink of an eye. It is said that Alfredo swore: “I would die when I decided it”, he repeated again and again. Death, as it is written in the Bible and Giuseppe knew it very well, had lost only once.  With its victorious mischief, a tragic day of 1948 denied the promise of my uncle, and took him without warning, leaving not just a woman, but two young women, three small girls and my Nono (TN: Grandpa in Italian), a 12 years boy.

Instantly, we associate women with white wine, gentle, delicate, soft. Imagine 60 years ago. But, my grandmother and his sister-in-law were red wine women, tough and strong. With the early death of their husbands, Catalina and Yolanda didn’t lower their heads. In the other hand, these women, young and beautiful, who owned a winery, went against all the stereotypes that a sexist society of only male leaders delimitated. They not gave way to any man that was behind their inheritance, despising their skills to run the business. Instead, they drank red wine with determination. Together until the end, and with a lot of conviction they succeed, until my grandfather, Carlos Lanzarini, without being adult yet, began working with them.

Everyone is talking at the table on Sunday, my grandmother with her homemade pasta and my grandfather uncork a wine, without label or brands, but I feel in the popping sound of the cork: the gardener hands of the old Giuseppe and the poor Emilia, my great grandfather Jose and his early death as a dawn, heard the strong voice of uncle Alfredo negotiating the Winery, Catalina and Yolanda opening doors against all odds, my Nono (grandfather) with his bunch of years between tough women as the land that was left behind by their husbands, many bad vintages and many good vintages. All my roots lie over the table. And it is inevitable not to see the history of my family side by side with the history of wine, because is the same story, they grew up together in these lands, and the years are uniting them more and more.